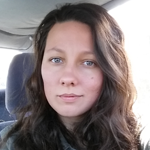 Jillian deBar is a graduate of California State University Monterey Bay. She holds a Bachelors in Liberal Studies, a minor in Human Movement, and an Associates in Adapted Fitness Therapy. She began volunteering her time in 2011 with Far West’s junior athletes/programs and became an official board member in 2013. Jill is passionate about Therapeutic Recreation and the experiences and programs Far West is able to offer athletes with physical disabilities. Her goal is to help far west and every athlete meet their full potential and continue raising awareness for adaptive sports. When not involved in Far West business she works as an EMT/Firefighter and likes to maintain an active lifestyle and spend time with family and friends.
Contact Jillian at jillian.debar@fwwaa.org. 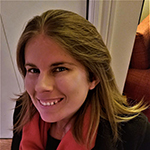 Anna Ryan is a college student, an adapted athlete, an owner trained service dog handler, and a member of the Spina Bifida Association’s adult council. She has been involved with Far West since 1995, having been part of Wheels On Fire, social media, and Junior Sports Camp. She is extremely dedicated to Far West’s vision for adapted athletes in the Bay Area, and has credited Far West as the inspiration for her future career in Recreational Therapy.
Contact Anna at anna.ryan@fwwaa.org.

Dr. Lori Riggio is a Clinical Psychologist with over 20 years experience in the mental health field. She has specialties in the areas of substance abuse, domestic violence, eating disorders, childhood and adult trauma, and developmental disabilities. Her work with children, teens, and adults has led her to partner with many non-profit agencies throughout California and to view collaboration as a cornerstone to innovation and achievement. As a parent of a child with physical disabilities herself, she has seen firsthand the wonderful opportunities and benefits FWWAA provides and is able to bring that unique perspective to the Boardroom. She has a passion for helping people recognize their unique capabilities and strongly believes in the mission and vision of FWWAA. 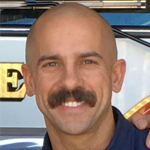 Danny is a Fire Engineer with the San Jose Fire Department. After completing his Bachelors Degree in Government from the University of Notre Dame in 2002, Danny returned to his native Bay Area to pursue a career in public safety. Danny officially joined Far West in 2016 after volunteering for several years through his fire department at Far West’s junior sports camp. In his role as Community Outreach, he hopes to broaden Far West’s footprint in the Bay Area and cultivate support for our many talented and inspirational athletes. 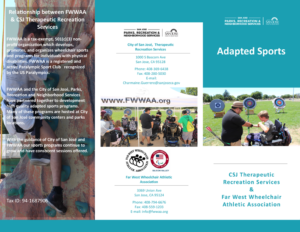 Thanks to our Sponsor 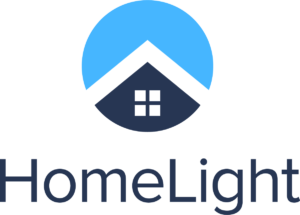